Abigail had her kids Sunday afternoon! My friend, Donna, and her husband were here for Easter and she and I went down to check on Abigail after dinner because I figured she would be kidding soon. She had a contraction while we were there so back to the house to get some towels. I figured she would probably take half an hour or so but when we got back, she had delivered #1 Son and he was pretty much dry!
﻿ ﻿ 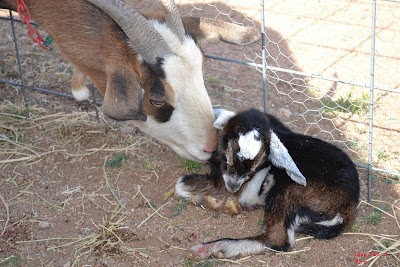 I moved him into the goat house and she spent some time cleaning him up. It was a good half hour before she started having contractions again and then it was only a matter of a few minutes before she delivered #2 Son and her little girl, Lily. 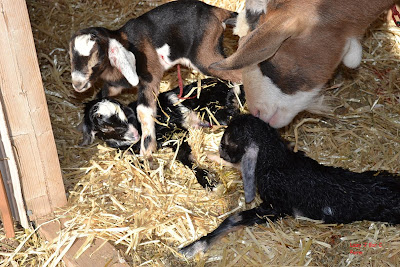 I sure was hoping she would only have two but, so far, she is nursing all three. I took some more pictures this morning. 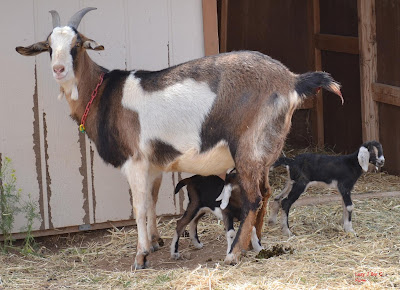 ﻿ ﻿﻿ ﻿﻿ ﻿﻿ ﻿﻿ ﻿﻿ ﻿
I am a bit worried about Abigail, she will eat the goat ration that I bring her and she has been drinking water but she hasn't been eating her alfalfa. If anyone has any input or suggestions I would really appreciate it!
Posted by Candy C. at 2:44 PM

oh, dear. i hope she does okay. triplets must be difficult to keep up with - energy-wise and milk-wise.

Oh my goodness! Congratulations to Abigail and to all of you! It couldn't have been easy... I hope she recouperates soon!

Is it possible the alfalfa has fallen on the ground? I've read they won't eat it if it's dirty.

I hope all the kids do well and that Abigail starts eating right soon. ♥

congrats on triplets, they should do fine with her so long as no one bullys one. Try her alfalfa first and give her grain ration hour or so later, course that makes double chores. Give her some molasses in her water to boost her energy.

Congrats on the babies! I don't know enough about goats to offer you any advice, but those pictures sure are cute...and I'll keep my fingers crossed that mama and babies do well! :)

Wow, trips... what a bunch of cuties. No real suggestions for momma eating, just lots of rest? Keep us posted.

Just the idea of triplets makes me tired...but they're cute! I hope her eating picks up soon!

Beautiful babies. Sorry have no ideas for you. Let us know how they do.

Awwww, TOO dang cute for words!

Candy, looks like you had a fun Easter surprise! Who needs the Easter Bunny when you have baby goats?

Triplets! Oh, my gosh! They are so cute. I hope you figure out the problem with the mom and she starts eating soon.

Oh they are sooooo cute!!! Congrats!!
I don't really know much of anything about goats. I hope she gets to feeling hungry soon though, and the kids do well.

...and those are BIG kids! So healthy looking. I hope Abigail is eating now.

They are so cute! Triplets!

These are beautifully babies! Love the tri-coloring. Have you tried warm water and molasses? At least she is eating something. If no alfalfa soon, I would try the probiotics.

OOooo so sweet! Congratulations. They all are so stinkin beautiful!!! So much fun. I dont have any input on Abigail... but is she eatin grass, I've noticed all my goats cuttin back on their hay cause they are eatin more green stuff.

Glad to hear Abigail is OK...sending healing thoughts for Lily. They are all just so cute...a nice surprise for Easter!!

Precious babies, and such a wonderful Easter gift!