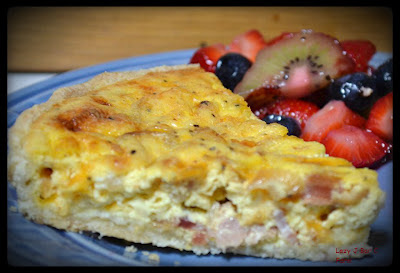 Jerry is not a big fan of quiche. In fact, he disdainfully calls it "egg pie!" Me, I love quiche and could eat it twice a week! :) I made this recipe for Cowboy Quiche on Easter Sunday when we had company. It is from Ree Drummond's new cookbook "The Pioneer Woman Cooks - Food From My Frontier." I have never been one to make my own piecrust because most people swear that you have to use vegetable shortening to make the best piecrust and I don't use vegetable shortening. I tried the suggested piecrust recipe from this same cookbook and it was wonderful! I will now be making all my piecrusts from scratch! The recipe makes enough for two piecrusts so I have an extra in the freezer now! :)

Lightly mix 2 cups of the flour, the salt and the sugar in a mixing bowl. Cut the butter into the flour using a pastry cutter. The mixture should look like large crumbs and begin to cling together in clumps. Add the remaining 1/2 cup flour and mix lightly. Do not overmix this flour, it should coat the clumps. Sprinkle the cold water over the dough and with your hands, mix it in until the dough holds together, then shape the dough into two discs. At this point, you may wrap the dough in plastic wrap for storage; it will keep up to a week in the fridge or up to six months in the freezer.
Roll out one disc of the dough between two pieces of parchment or waxed paper until large enough for your pie pan.

Preheat the oven to 400 degrees. Line a 9-inch deep-dish pie pan with the crust, set aside.
Chop up the bacon into bite-sized pieces. In a heavy skillet, over medium-low heat, fry the onions in the butter until deep golden brown, 12 to 15 minutes. (I cooked the bacon in the skillet and then cooked the onions in a little of the bacon grease.) Mix the eggs, cream and salt and pepper in a bowl. Add the bacon, onions and cheese, stir to combine. Pour the filling into the pie shell, cover lightly with aluminum foil and bake for 45 minutes. Remove the foil and bake for an additional 10 minutes or until the quiche is set and the crust is golden brown. Remove from the oven and allow to sit for 10 minutes. Serve warm or cold, either way is scrumptious!

Jerry actually ate some of this quiche on Easter AND had a piece for breakfast a couple of days later! He grudgingly admitted that it was "pretty good!" ;~) After all, how can you go wrong with bacon, onions and cheese!

Linking up with Heidi and Deb for Farmgirl Friday and Sall's Country Life for the premier of Farm Fresh Friday. This quiche was made with my Farm Fresh eggs, goat milk and goat cheese. :) I hope you get a chance to check out both of these great blog hops!
Posted by Candy C. at 7:29 AM

Oh my! farm fresh eggs, goat milk, and real goat cheese?? That IS Farm Fresh! Sounds and looks delish...Jerry would have to be crazy not to like your Cowboy Quiche! Thank you for sharing it with our first Farm Fresh Friday!! Have a great day!

Candy, I have never made Quiche. I'm not sure if J would go for it. "Egg Pie" sounds like something I would hear too! Guess I will have to try it and see.

I made the Banana Split Bunt Cake from A Farmgirl's Dabbles. It is yummy!

I might have to try this crust recipe. It looks like a great recipe, and I love quiche too.

I HAVE to get Ree's book! I love watching her on TV. Thanks for this recipe and for the crust recipe too. My husband won't eat quiche either, so I will have to try this on him. Like Ladd (Ree's cowboy hubby) and your hubby (I suspect!) my husband is a meat and potatoes man! :-)

Can i come over for supper. That look tasty as heck.

Yum!!! We love quiche! This recipe is similar to one of ours but I'll have to try your crust recipe! Thanks for sharing it!

This sounds so delicious, must give it a try.

looks soooooo good. i'll be trying that for sure!

Yum! It really would be hard to go wrong with that combination!

Colin will eat quiche when I make it, but he's hungry before heading back out the door to chore. He's ready to fall over by snack time :) Now I only make quiche on Sundays, his 'day off' and he only has 4 hours of work to do.

We're always looking for a good egg recipe, now especially since we have a new batch of chickens! I remember a couple years ago bringing dozens and dozens into work so someone would help us consume them all!

It does look good! ....my husband is the same way about quiche. Bet he would like this one too.

I LOVE quiche! Sometimes I mkae frittatas, simliar with no crust. Costco sells one that has swiss cheese and brocolli? Pretty good... but not like homemade:)

Looks very yummy! My man isn't a fan of quiche, either! Silly men. I love it, too :)
-Jaime

I love quiche too! This is a great recipe, Candy. Thank you for sharing dear. :)

oh i am going to have to try this! i'm pinning it so i remember!!