First of the Month - May

I'm joining Jan at Murrieta 365 for her First of the Month meme all this year. Here are the ground rules per her site: "The goal is to capture one thing repeatedly on the first of each month. It can be a landscape, a person, an animal, a project; whatever your focus is, is fine. It can even be a record of where you are each First of the Month."
I have been focusing on my Alpine doe, Abigail, and her first pregnancy and kidding. Well, we had babies on Easter Sunday! :) Triplets, two boys and a little girl.
﻿ ﻿﻿ ﻿﻿ ﻿
All seemed well until Tuesday. Little Lily was lethargic and wouldn't nurse so I started force feeding her. She died in my arms on Wednesday morning. I still get teary-eyed thinking about it. In retrospect and talking to my girlfriend who was here when they were born, I think Abigail stepped on her and might have caused some internal injuries. Jerry buried her underneath a mesquite tree for me.
Again, all seemed well. Abigail was nursing the two boys and being a pretty good mother. Then, on Friday morning, we noticed No. 2 Son was a bit lethargic. I put him over near Abigail so he could nurse but she butted him away. I tried several times but she had rejected him for some reason. He became a bottle baby. 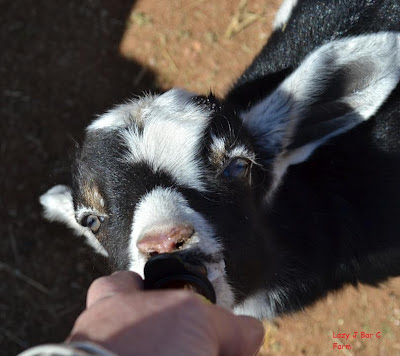 Since I was now his maaa, I renamed him BW because he is black and white! :)
I worked with Abigail every day so that I would be able to start milking her and every day, she would NOT let me touch her udder! As she was eating her grain, I would pet her and talk to her and move my hand down her back with no problem, down her leg with no problem, but when I got to her udder, she would butt at me and run away. This went on for over two weeks and she just wasn't getting ANY better so I made the hard decision to sell her. I love my goats very, very much but I just can't afford to feed a goat that won't let me milk her. I sold her and the two boys to a guy who has bought goats from me before. He and his wife came and picked up Abigail and No. 1 Son this past Sunday. BW is going to stay here for another three to four weeks until he is old enough to be weaned. He is now in with his grandmaaa and great-grandmaaa. Great-grandmaaa, Nike, is sooo good with all the little orphan goats, she lets them hang out and teaches them how to be goats! I'm so glad I have her!
﻿ ﻿﻿﻿
﻿﻿
On a separate note, we also sold the miniature donkeys, Esmeralda and Mercedes. Hay in our part of the country is still hovering at $20 a bale and despite their cute factor, we couldn't justify feeding them since we now have Dallas as company for Paco. We sold them to a very nice family from Willcox who raise miniature horses. They brought their children when they came to pick the girls up and the kids were instantly in love with the donkeys! Here is one last cute donkey picture. 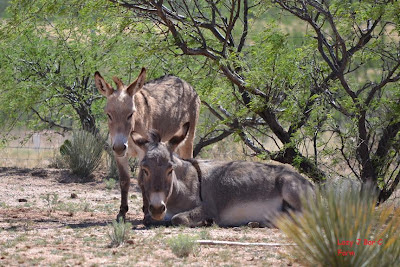 Honest to Pete, I've had a pretty rough week emotionally. I feel like a failure with Abigail. If only I had worked with her more when she was young she might have been less "wild." I really miss the donkey girls but know they went to a really good home and we have been invited to visit whenever we are over that way. On a brighter note, I am buying a two-month old Alpine doe tomorrow from one of the girls at the Farmer's Market and I am excited about that. I will post pictures soon! Sorry for such a long post...
Posted by Candy C. at 9:22 AM

Email ThisBlogThis!Share to TwitterShare to FacebookShare to Pinterest
Labels: Animals, First of the Month, Tuesday's Tails

oh dear. i can only imagine the run of emotions you've had. letting the donkeys go would have been tough!

I'm sorry you've had such a rough week. It's not easy to let go of animals we've become attached to.

So sorry you lost your little doe kid. I finally found some hay here for %15.95 for alfalfa, most of it is still $18.95. Problem with the cheaper hay was it was baled wet, hard to separate the flakes and it smells bad, not moldy but just bad smell, thank goodness I have grass up to the bellies on the Dorpers and the cows, only ones I have to feed are the Shetlands and the goats. I would not be feeding the goats except they jump the fences, eat the trees, yada, yada, yada, they are goats. Need to do some serious downsizing here soon, grass has a lot of foxtails so want as much eaten down as fast as possible.

That is a rough emotional week. It's hard to tell train a goat to milk that really doesn't want to be messed with. I had my bottle baby Lily that is the absolute worst to try and milk. I gave up. Hope your new girl will work out for you.

Sounds like a hard time of emotions. Decisions like those are never easy.
I hope you have a better week.

There are always tough decisions to be made, aren't there? It sounds like they have all gone to great homes, so that should be some consolation. Did you try tying Abigail to a milking stand? I am working with my skittish girl, too. It's a loooong process and sometimes it works, sometimes it doesn't. We were lucky - hay-wise - here last year, and I'm hoping that this year is okay, too. With this wild weather you never know. Can't wait to see pictures of your new Alpine doe!

*hugs* Don't feel too bad about Abigail (not easy I know); I think I have read or seen something somewhere about this happening before.
Of course it only happens with first time Maaas.
Sorry to hear about feed and the donkeys; but I'm really glad to hear you found good homes for all.

I know you pain and I am so very sorry for your loss. It is never easy but be kind to yourself you did what you could. I also feel your pain with the hay prices - I am sitting with this same decission and hope for guidance and a miracle. Hugs to you and know you are not alone..

Oh you poor thing. I know how hard this all is. Hang in there. We know you are trying. Were the triplets crossed with a Nubian.

Well you have had a lot of changes this month too... I know its hard sometimes & things change. Its good you found good homes for all the animals. Cant wait to see your new doe.

That is so sad about losing your little doeling. :( Glad you saved the one boy though. Who knows what goes through the minds of goats! I hope things work out with milking Abigail. Uncooperative goats are never fun!

I'm so sorry, Candy about all you've been going through emotionally with your farm animals. I know it was tough letting go of Abigail and the two boy kids. Then, selling the miniature donkeys. I had heard that hay is so expensive people are having trouble feeding their horses, and some are being let loose to fend for themselves, which is so awful. I'm glad they all went to nice homes, and that you can visit if you want to.

So sorry four your rough week. Hay is difficult to find here, sorry you had to sell the donkeys.

Big hugs Candy! Spring can be a difficult time for sure. I'm sure you did the best you could. Happy that the goats and donkeys have nice homes to go to and excited for you new doe. :)

Chin Up, Candy! Unpredictability is the spice of life. It just isn't always fun.

I'm sorry to hear things were not going well, they are cute but you're right, you have to make some decisions and find the right mix.

My neighbor who has horses was just telling me she can't find any hay here because all the farmers have shipped all their extra hay out west where they can get $20 a bale for it instead of $2 a bale. I can't even fathom paying that much for hay!