Tuesday's Tails - My What Big Ears You Have! 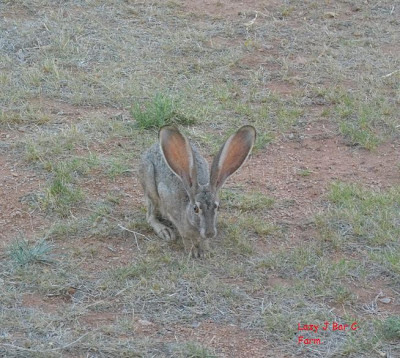 We have a LOT of jackrabbits and cottontails around here, mostly because the dog, Buddy, doesn't chase them! :) The rabbits are usually most active real early in the morning or late in the evening, not very conducive to picture taking. I got pictures of this guy enjoying a little nibble of grass through the kitchen window in the late afternoon recently. 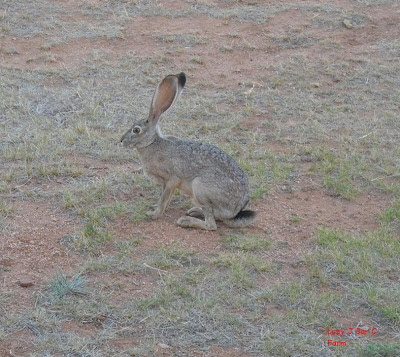 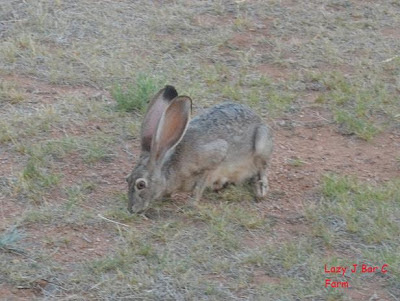 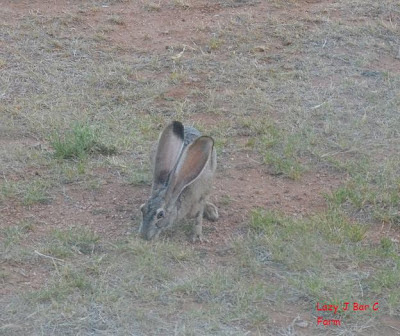 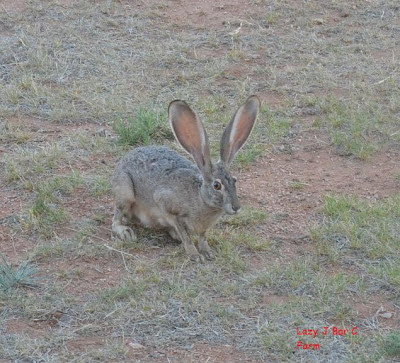 It always amazes me how big these guys are. Here is a little fun info from National Geographic.

"Jackrabbits are actually hares, not rabbits. Hares are larger than rabbits, and they typically have taller hind legs and longer ears. Jackrabbits were named for their ears, which initially caused some people to refer to them as "jackass rabbits." The writer Mark Twain brought this name to fame by using it in his book of western adventure, Roughing It. The name was later shortened to jackrabbit." They can be up to 24 inches tall and weigh up to 9 pounds.
Posted by Candy C. at 8:51 AM

Great photos. We have cottontails in our neighborhood, but jackrabbits nearby where there's no development.

so darn cute! your photos made me laugh!

What big ears you have...

I love those rabbits!

Those are some ears, indeed! Thanks for sharing your pictures with us. :o)

Not that I need another garden eating critter in my yard, but I'd love to see one of these guys!

Ha ha ha! OH my goodness. Thanks for posting that. I have never in my life seen one before.

think they are an endangered species in CA. Did see one a year or so ago in field where they had torn out old orange grove before planting new trees. Reminds me of a Kangaroo with big ears, LOL. Love to watch them run. Don't think they ever run in a straight line, always zig zagging as they run. Love those ears. As for cottontails few of them are around here, love the little white puffs of a tail on them.

I felted my first little animal...a rabbit. My husbands comment was "his ears are too big". I will now tell him na-ah, this is a jackrabbit :-)

They sure do have BIG ears, lol. Cute.

Man those are radar dishes! And maybe some rabbitt stew...

Cute! I can't believe you were able to get that close.

Too cute! But now beagle Bert wants to move to Arizona. ;)

Wow, those are big ears!

I don't think I ever realized that jackrabbits ears are that big! They really are big!

Those ears are huge!

Just think of what one could do with ears like that. You could probably actually hear the grass grow.