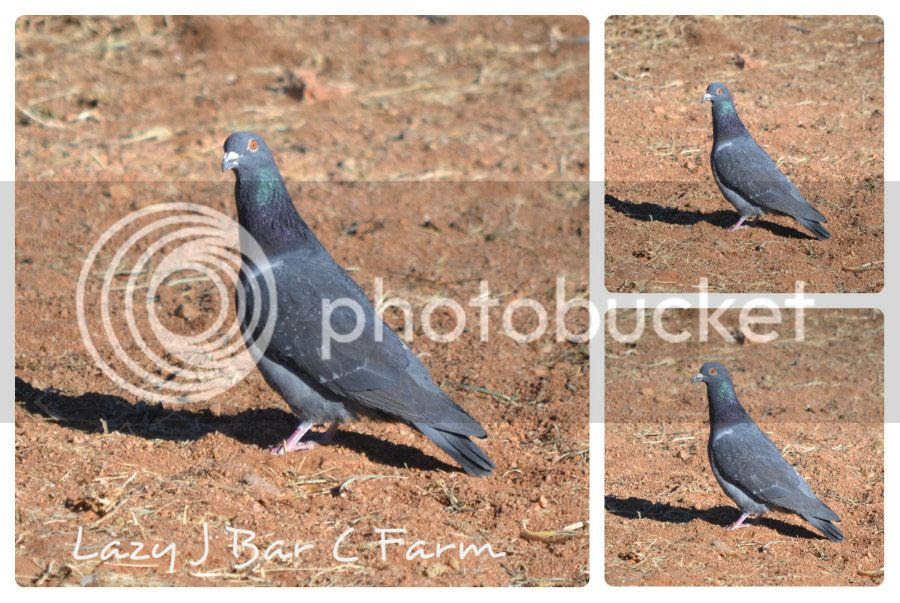 We have had a pigeon hanging out down by the barn recently! That might not seem so strange to a lot of ya'll but we just don't have pigeons here in the country. As a matter of fact, there aren't even any pigeons in Benson. Lots of grackles but no pigeons. You have to go all the way to Tucson to see pigeons. So far, there is only the one and I told him that he can hang out with the Eurasian Collared doves and the Mexican grackles as long as he doesn't bring all of his little friends. I know pigeons are considered a pest by many people, Jerry even calls them flying rats, but I think they are actually kind of pretty. ;) 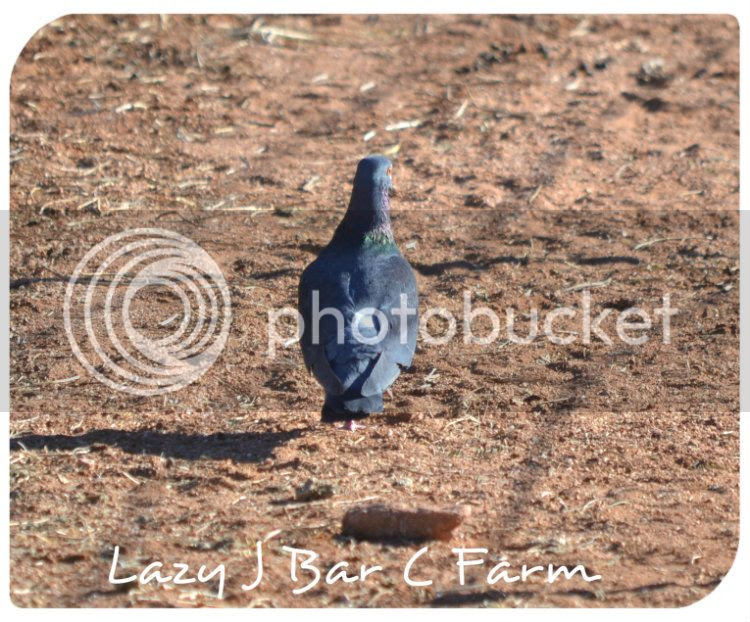 Email ThisBlogThis!Share to TwitterShare to FacebookShare to Pinterest
Labels: Animals

so funny. i tell folks that the only 'common' bird i've never seen here at run*a*round is a pigeon. it's true, though. i've seen them down the road at one particular house roof, but never here. :)

Nice shots. When I saw the picture before I read the text, I was thinking it seemed out of place.

Flying rats, huh? That's funny, but I agree with you, I think they are kind of pretty :)
Nice captures!

No pidgeons? I wonder how he got there.

We have a few extra pigeons we could send your way!

Interesting...I wonder if he is looking for his buddies thinking which way did they go? ;-)

We have lots of them here. I think some of them have beautiful colours. B

Oh, how exciting!! We had a pigeon that hung around our bird feeder for YEARS! Oh, how the kitties loved to see her come over!!! We named her "Bernice" after Bert's (Ernie & Bert from Sesame Street) pet pigeon.

After many years of visiting, one day she just didn't come anymore and we were very sad. Now, when I see pigeons anywhere, I point one out and yell "Hey! It's Bernice!" and it makes us all feel better.

Now I can say that she is off visiting you. :)

Tell Bernice I said "hi", will ya?

I like pigeons. We do not see them too often, but I like seeing them and I enjoy listening to them coo too. That is a pretty bird. Nice photos Candy.

Very neat photos. Birds are so hard to photograph too.

A wayward pigeon story : ) It would be nice if he would hang around, but I bet he misses his kind. I like their cooing.

i hardly ever see pigeons here...maybe they are downtown? poor things, i think they get a bad rap. pigeons always remind me of the carol burnett skit where she sits on the bench feeding the pigeons :)

It's always fun to see different creatures, but anything can be a pest if they outstay their welcome. Nice shots.

With the barns we have, it's a wonder we don't have any. I think they are pretty as well. :)

I'd gladly send you some pigeons. I hate the stupid birds. What a bunch of pains they are around the farm.
But so glad you like them. ;)

He is pretty...you see them so much in the city you don't think about them not being out in the country. I wish I could see a Eurasian collared dove!

Pigeons in your corner of Arizona? Hmmmm.....I remember the first time I saw seagulls in the parking lot (they were flying and perching on the light poles) in the town 20 miles from here. I know they're on the Columbia River, but that's miles and miles from here! I guess birds just go where the wind takes them.

How cute! I think pigeons are pretty, too :)

The sound of pigeons cooing in the neighbor's abandoned barn is on the memories of of childhood. Come to think of it, I don't see pigeons that often where I live now, even with all the old barns.