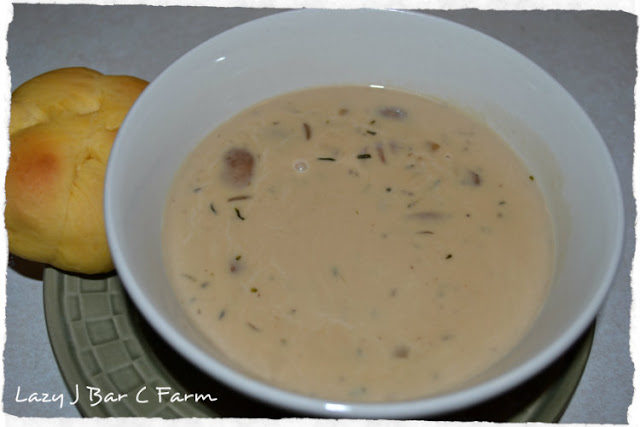 Jerry told me that this was the BEST soup I have ever made and he does not even LIKE mushrooms! ;)
This recipe comes from Mama Pea at A Home Grown Journal and is part of her Soup Sunday series. It goes together quickly, doesn't call for any off-the-wall ingredients and tastes divine! Who needs soup in a can anyway?!?

Melt butter in a saucepan. Add mushrooms and onions and cook, stirring often, until mushrooms are brown and most of their liquid is gone.
Sprinkle with flour, salt, savory and pepper. Cook and stir for a minute or two.
Remove from heat and slowly blend in beef stock. Put back on heat, bring to boiling, cover and reduce heat and simmer for 20 minutes. Mixture will be very thick so simmer on a low heat and stir now and then to make sure it's not sticking.
Mix in the Half-&-Half and heat to serving temperature being careful not to let it boil.

This makes enough for two main dish servings with just a bit left over, which Jerry promptly ate after finishing his first bowlful!
Sharing with The Country Homemaker Hop, the Down Home Blog Hop and Farmgirl Friday.
Posted by Candy C. at 2:56 PM

i'm not a mushroom fan, and i'll never use your recipe, but that homemade roll sure looks good! :)

Wow that seems simple to make and not too chunky for a mug...thanks for sharing. Enjoy your day!

I love mushrooms but never thought to make my own soup with them! Thanks for sharing your recipe. I'm going to print it out and give it a try :0)

I am making this tonight. Just sent my daughter to the store for mushroom.

Cream of mushroom has always been one of my favorites, probably the first I choose.

So simple and lovely! Thank you, Candy (AND Mama Pea!) for sharing this recipe... I already know that I will love it!

I saw that one too. I have it bookmarked to try when I feel better.

Oh this sounds so good I never liked canned mushroom soup but I would love this. Half and half great idea. B

It is, of course, the goat milk that made it taste so good. :)

That would be perfect with our blustery weather today!

Yummy! I do love mushrooms, so I bet this soup is out of this world!

I think the onions might be the secret ingredient. :)

I have a similar recipe--but it has spinach and cheese added. :) One of my favorite soups.