There is another new fire in southeastern Arizona now, the Monument fire down near Sierra Vista, about 50 miles south of us. As of yesterday afternoon, it had burned 9300 acres in the Huachuca Mountains and destroyed 50 structures including 40 homes. Some people literally had minutes to evacuate because the fire was moving so fast. Here is some information from Wildfire Today.

The Horseshoe Two fire continues to burn in the Chiricahua Mountains near Portal. It has burned 184,000 acres. Here is a satellite view of the Horeseshoe Two fire, I could actually see both smoke plumes yesterday afternoon. We can see the smoke from both of these fires from our house.

Last week, we had really thick smoke here from the Murphy fire down near Rio Rico. It has burned 68,000 acres. Thankfully, the firefighters now have that one fully contained. Here are some pictures of the smoke we had last week. 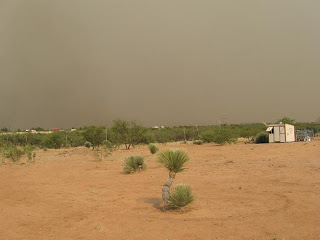 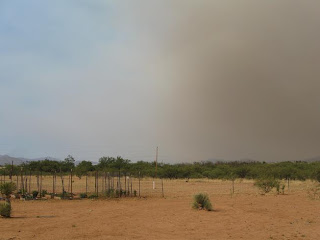 The weather service is predicting 25-30 mph sustained winds this afternoon with gusts to 40 mph and more wind tomorrow, it is 100 degrees, we are in the middle of a drought and there is no humidity. I was watering the garden at 7:30 this morning and the winds have already started, doesn't bode well for the firefighters or the people living in the area of these fires.
Posted by Candy C. at 8:48 AM

Email ThisBlogThis!Share to TwitterShare to FacebookShare to Pinterest
Labels: Misc.