Seems like everyone in Cochise County has chickens these days, us included! I got my first chickens as a trade for a kitten about six years ago, I think I got the better end of that deal! LOL!!  We had some pretty primitive accomodations for the girls for awhile but had this hen house built a couple of years ago when we expanded the flock so that we would have eggs to sell at the Farmers Market. My ﻿first two chickens were Araucanas and one of them, Dolores, is still around and gives me 6-8 eggs every year, mostly in the spring. The rest of the girls are Barred Rocks and they are all named "Chicken!" I would like to get some Buff Orpingtons for my next batch; I just think they are pretty! 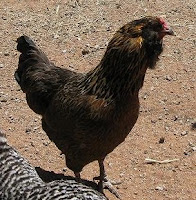 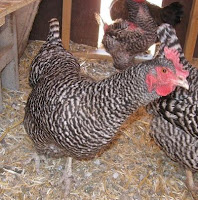 I have one hen with a bad foot so she has her own little pen and a dog house for shelter. She was fine when she was little but at about 5 month's of age her foot just twisted up. She gives me eggs though! Her name is Gimper Chicken. 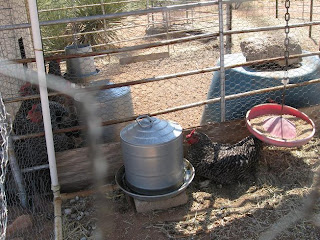 We used to have a Black Jersey Giant rooster but for some reason the girls started pecking at his feet and wouldn't quit! I tried putting all kinds of icky stuff on his feet to discourage the girls from pecking but nothing seemed to work. He got to where he would spend most of his time sitting in one of the nesting boxes to protect his feet! I finally put him in with Gimper Chicken until his feet healed up and then I sold him. He was a real nice rooster, I was sorry to see him go! 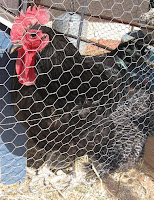 We just love having fresh eggs all the time! Just can't beat 'em! The girls are getting a little older so I don't get as many eggs as I used to, only about three dozen a week. I take one or two dozen to the Farmers Market every week and they always sell even though it seems like every vendor there is selling eggs! LOL!! That is Dolores' latest egg on top in the basket. 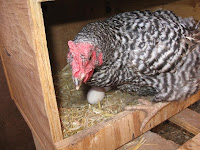 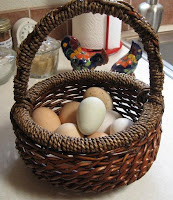 Email ThisBlogThis!Share to TwitterShare to FacebookShare to Pinterest
Labels: Animals