Along with reindeer, think yule goat at the holidays; it's been part of Scandinavian mid-winter celebrations for more than 1,000 years.

If you think of Christmas and think of reindeer, think again. Think of the yule goat.
Call him the julbock (Sweden), julebukk (Norway), or joulupuuki (Finland), he's been part of Scandinavian mid-winter celebrations for more than one thousand years.
In ancient midwinter celebrations a human dressed in goatskins and wearing a mask portrayed the Norse thunder god Thor's goats, Tanngrisnir (Gap-tooth) and Tanngnjóstr (Tooth-grinder), who pulled his chariot through the winter sky.
In a traveling play called the "Juleoffer," the man-goat "died" and came back to life, just as the winter sun does at Yule.
Early Christian fathers frowned on pagan revelry, so they proclaimed the Yule goat a demon.
According to 17th-century Swedish records, this darker version of the Yule goat traveled the countryside demanding food, playing pranks, and frightening people on the night of December 25.

He eventually become a benevolent being, giving gifts instead of demanding them.

Still later, instead of giving presents he worked for those who brought them. Gnome-like, gift-giving Swedish tomten, Norwegian nissen, and Finnish tonttu all rode Yule goats or hitched them to their sleds.
Early twentieth century Scandinavian artists like Jenny Nyström popularized the Yule goat and his tomten handlers through hundreds of charming, antique Christmas cards you can still buy at eBay today.
Here are several more ways to add the spirit of the Yule goat to your Christmas festivities this year.
This article is reprinted from HobbyFarms.com.

﻿﻿﻿﻿
﻿ I couldn't find any instructions to make your own Yule Goat but I liked this picture! I went with the cookies instead. Oh, and this is all that's left of the batch of cookies I made Sunday evening, the farrier and his girlfriend were here yesterday and they really liked the cookies! ;-) 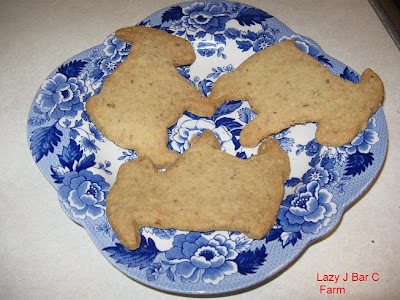 I bought my goat cookie cutter from Hoegger Goat Supply.
Posted by Candy C. at 4:53 AM

Great bit of history, Candy! I appreciate hearing it...and gosh those cookies MUST have been good. Now I have to make them! :)

I've heard of Tomtem but I've never heard of the Yule goat. But then I haven't found any Norse family in our tree :) Our family is more German/British Isles. I love the plate the cookies are sitting on. It would be perfect with my Wedgwood.

Paula,
I actually did a whole post about the Goody Plate last summer! LOL!!

Wonderful! I'm so glad you told this tale. I'm certainly going to go order a goat cookie cutter as well!

Teresa,
Just one more reason to celebrate our goaties!! :)

What a charming story! I'm so glad you shared it! And your cookie recipe looks divine... now I want to make a herd of those cookies myself!

I bought my first julbock this winter, on eBay. He's sitting on a shelf next to my tomten:) Will post pics on my blog...

Jean,
I haven't figured out how to do it yet!

homegrown countrygirl,
I highly recommend making your own herd of cookies! I need to replace mine already! LOL!!

Nancy,
Oh man, I'm so jealous!! I can't wait to see your pictures!!

Very interesting. This is a tradition I had never heard of before. Love the goat shaped cookies!

Kateri,
I just heard about it last year myself!

faith hope love,
Happy Holidays to you too!! :)