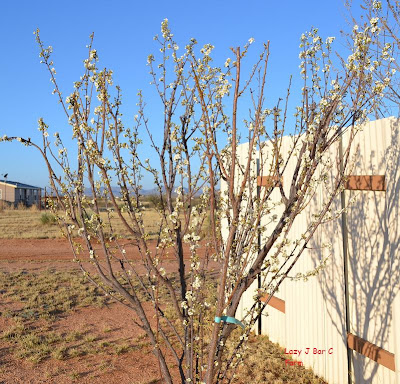 As you can see, the fruit trees were unfazed by last week's snow storm. Jerry had fertilized them recently and with the moisture, they are really taking off. The temps are going to be in the 60s and 70s here all week and I hope that was the last of the colder weather. We have been known to have a hard freeze as late as the end of April though. 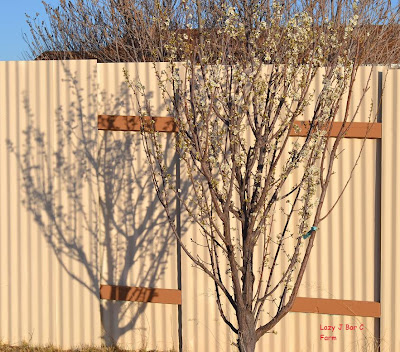 I also wanted to include this picture because I really like the early morning shadow on our "Barrio" fence! :)

The plants in my little garden are all doing pretty good too. These have still been covered with the plastic. 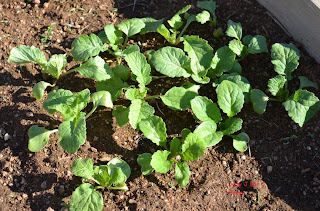 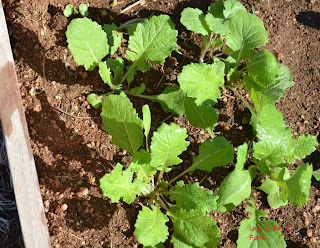 My snow peas, on the other hand, have not...wish I could figure out "who" is eating them! Grrr! I believe I have the garden pretty rabbit proof but it could be a rodent of some kind or even the silly little birds who have claimed the garden as their own. We took down a bunch of fencing that I was using for trellis in the garden and I'm going to try to make some hoop covers to see if that will help protect the plants. 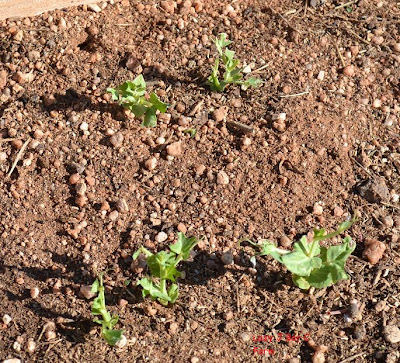 Linking up with Heidi at My Simple Country Living for The Country Garden Showcase.
Posted by Candy C. at 9:01 AM

The blossoms are so pretty!

Looks like good snacking at your place right now.

i saw our first blooming trees this past week here, too. not on our property yet, but along the roads.

I have a few more months til blossoms... sigh...

I'm anxious to see blossoms here. It feels like spring, but we've still got a few weeks yet!

we're still a long way from seeing any of that! There are a couple patches of mud, but everything is still frozen.

Teresa,
I love how the blossoms come before the leaves!

Millie,
Yep, that's why the goaties are confined to the pasture! :)

TWG,
I sure hope Old Man Winter doesn't throw us all a curve ball!

nancypo,
It will be here before you know it!

Alica,
I always love seeing the first signs of spring!

Paula,
I'm sure spring will come, even to the Great White North! :)

Everything is looking great for the most part. Thanks for sharing your green with us. :-)

LindaG,
Thank you for your comments, I so appreciate them! :)

I cover the young plants with a lightweight floating row covers. Use some hoops and clothes pins to hold the fabric on, it is great protection from birds and animals (house cats included). The plants will be warmer and the seeds will germinate better.

How exciting! We are most definitely not done with hard freezes here, but I'm really looking forward to my fruit trees budding in their due time, too :)
-Jaime

Sharon,
I had some of the cloth left from last year and covered a couple of the boxes already. Luckily, I don't have a problem with kitties using my garden for a litterbox! LOL!!

Jaime,
It is always exciting to see new life budding out! :)

Your post is inspirational. I can't wait to add more fruit trees to our farm.

Hello Candy,
Your Santa Rosa plum blossoms look beautiful. It seems our climate is similar. We had snow last week, and we'll be in the 60s this week. We also suffer late freezes. Last year's hit on May 21st, included snow and ice, and killed almost everything. Like you, I am crossing my fingers. It sure has been a mild winter so far, don't you think? Thank you for sharing your lovely pictures. I like the shadow the fruit trees cast on your barrio fence too and your baby veggies are so cute. Mine will all be under plastic after this weekend.

Kristina,
I love having the fruit trees, I consider them useful landscape plants! :)

Heidi,
It does seem that our climates are pretty similar and, yes, it has been a pretty mild winter so far, hope it stays!

You've definitely got a good two month's jump on us here in Nebraska. Loving your trees -- so pretty!

All these posts of blooming plants are making me wish spring would come faster!

Clint,
Spring will be here before you know it! :)

I host a weekly garden link up every Friday on my blog and I'd love to have you stop by! :)

Love the little green plants. I'm eagerly awaiting when I get out and plant--it will be at least a month (if not a bit longer) for that though here in michigan.