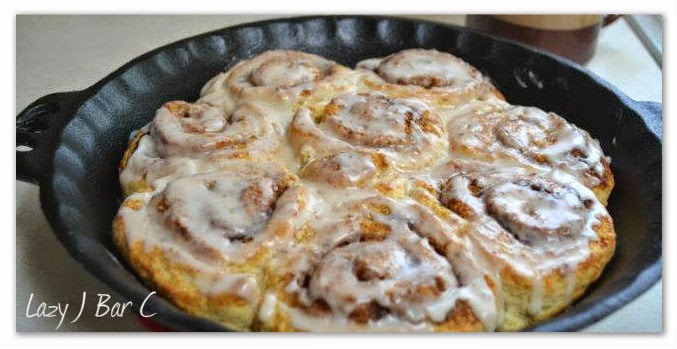 We love cinnamon rolls on a weekend morning but I never plan far enough ahead to have yeast dough ready to go early in the morning. These biscuit cinnamon rolls are not as smushy as yeast rolls, which is a good thing to me. They go together quickly, have lots of cinnamon-y goodness and the icing is well...icing on the cake! ;)

Preheat oven to 425 degrees. Lightly grease a 9-inch pie pan.
To make the biscuit dough, cut the butter into the Baking Mix until it resembles coarse crumbs. Make a well in the center and add the buttermilk all at once. Stir until a soft dough forms. Turn the dough out onto a lightly floured surface and knead 5 or 6 times. Roll or pat the dough into a 9 x 12-inch rectangle.
Spread the softened butter over the dough. Sprinkle evenly with the brown sugar, granulated sugar and cinnamon. Starting with one of the short sides, roll the dough into a log pinching the seam to seal. Cut the log into 8 equal pieces and place them, cut side down, into the prepared pan.
Bake for 20 to 25 minutes or until the biscuits are golden brown. Remove from the oven and let cool for 5 minutes while preparing the icing.
In a small bowl, combine the powdered sugar and milk stirring until smooth. It should be pourable but not too runny. Drizzle icing evenly over the biscuits spreading as necessary.
Serve warm.

P.S. I LOVE my cast iron pie pan and use it for lots of different things, even oven fried potatoes! I found it at C-A-L Ranch Store.
Posted by Candy C. at 10:46 AM

Curse you, oh baker of delicious-ness, temption thou whilst one is trying to be on a diet (said through gritting teeth chewing on baby carrots).

Oh, my, these look yummy! My hubby would eat the whole pan. Thanks for sharing the recipe ... :) Pat

I'll bet they were great! And I love your pretty pan:@)

Great Day! These look so darn good! I must make them!

this post would have gone great with my morning coffee. :)

I can almost smell them! What a great and easy recipe!

Stop, stop, STOP! These recipes of yours are driving me nuts! I have been hungry for cinnamon rolls lately, but have avoided making any yet. Now . . . ???

How fast and easy!! The grandson would love these!

WOW, those look great! I love anything with buttermilk...

I'm writing this down! Like you I've always wondered how not to get up at 4 am to start the yeast dough so we could have cinnamon rolls for breakfast!

About Vikings...so happy you are crazy about it too...I flipped out when he "died" this past episode and then voila! That was so cool!

Those look amazing! One of my favorite weekend breakfasts. And that pan is fabulous!